Or, if you'd prefer to learn by doing, start with our Getting Started Guide.

Adapt is the easiest way to reliably and repeatedly deploy your apps anywhere -- to your laptop, a Kubernetes cluster, your favorite cloud, or anywhere else.

Similarly, Adapt makes it easy to describe complex apps, how the various components of an app get deployed, and how those components interact with and change in response to each other and the external world.

This guide will cover some key concepts in Adapt, along with their React counterparts, where applicable. But to illustrate most of these concepts, we'll need a sample app that has a little bit of complexity.

Since you're a developer familiar with React, the sample app that we'll use is a small movie database app that consists of: 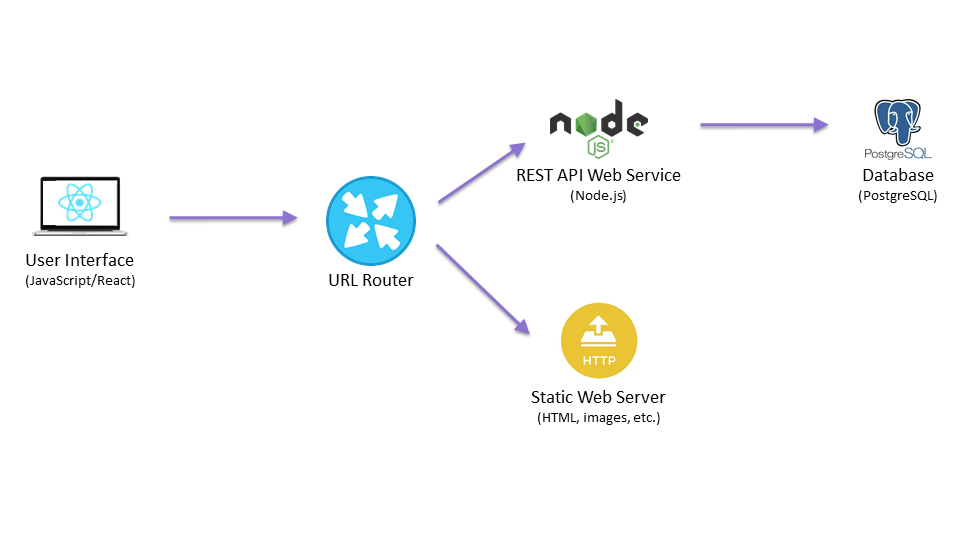 Below is the Adapt description of the movie database app. The rest of this tutorial will explain the parts that make up this app description.

If you know React, this probably looks mostly familiar, but with a few new things too. Let's jump in and take a look at all the pieces that make up this description.

To get all the code for this movie database and deploy the fully functioning app to an existing Docker instance on your local system:

Adapt specifications are written in TSX or JSX[1] and produce a virtual DOM that is made up of Elements, just like React.

Adapt currently uses the JSX/TSX processor from the TypeScript compiler with no modifications or extensions. For a more in-depth description of JSX/TSX, see Introducing JSX from the React docs.

Just like React, Adapt Components let you split an application into independent, reusable pieces, and allow you to think about those Components in isolation. In our movie database app, MovieApp is a Component that describes our entire app.

As with React, every Component can accept arbitrary inputs, called props. Here, MovieApp accepts a prop called publicPort and it passes the value of publicPort to the UrlRouter Element's port prop.

The MovieApp Component returns the set of Elements that describe our movie app:

React uses the concept of a ref to allow a Component to reference and interact with specific Elements or browser DOM nodes. This is typically used for imperatively modifying an Element, such as to set focus or trigger an animation.

Adapt has a similar concept, called a Handle which also allows you to reference and interact with Elements.

Adapt Handles are used for:

Our MovieApp component contains several uses of Handles. It starts by creating three new Handles and assigning them to variables api, pg, and stat. But to make a Handle actually refer to a specific Element, the Handle must be attached by passing the Handle to an Element as its handle prop.

The reason connectEnv is called via the useMethod hook instead of a direct call of the component method is due to connectEnv using state to store the hostname or IP address information, once Postgres has been deployed. For more info on how this works, see Element State.

In the movie app, we use the useMethod hook to call the connectEnv method on the handle named pg. Then, the resulting connectEnv variable is passed into the NodeService Element. When NodeService is deployed, it will have the resulting dynamically created environment variables that allow it to connect to the Postgres database.

The UrlRouter Element also uses Handles to specify where to route different HTTP URL paths. The routes prop is given an array that describes each route, where endpoint is a Handle that refers to an Element that must provide imperative instance methods hostname and port. For each endpoint, UrlRouter will call the hostname and port methods to build its own configuration dynamically when it is deployed.

In the movie app, UrlRouter is configured to route URL paths that start with /api/ to the NodeService REST API Element and all other URLs to the static HTTP server.

In the movie app, the library function useMethod is a hook function that encapsulates the behavior of calling a method on an Element instance referenced by a Handle.

Just as with React, Hooks can be used to manage state in Functional Components and, by convention, always start with use.

Although React doesn't directly specify how to integrate with Cascading Style Sheets, CSS is critically important for any browser-based interface.

Adapt has a very similar concept called Style Sheets that also enable separating the content and structure of your app from the style of how the app should be deployed.

CSS has another important and powerful concept called selectors that make it easy to operate on very large browser DOMs that contain thousands of elements. CSS selectors make it easy to choose a specific set of elements upon which to apply style. For example, you can select all <div> elements to remove their border, make every <caption> element have a larger font, or make the background of only the element with a particular ID red.

You can find out more about style sheets in the Intro to Adapt Concepts Tutorial.

In React, Class Components set an initial state by assigning to this.state in the class constructor. In Adapt, the initial state cannot be set this way.

Instead, all Adapt Class Components that use state must define an initialState class method that returns an object.

React and Adapt both create and operate on a virtual DOM and use a similar process for processing updates. This section only provides a high-level comparison of both systems. For more precise details on how each system works, please check the respective user guides. 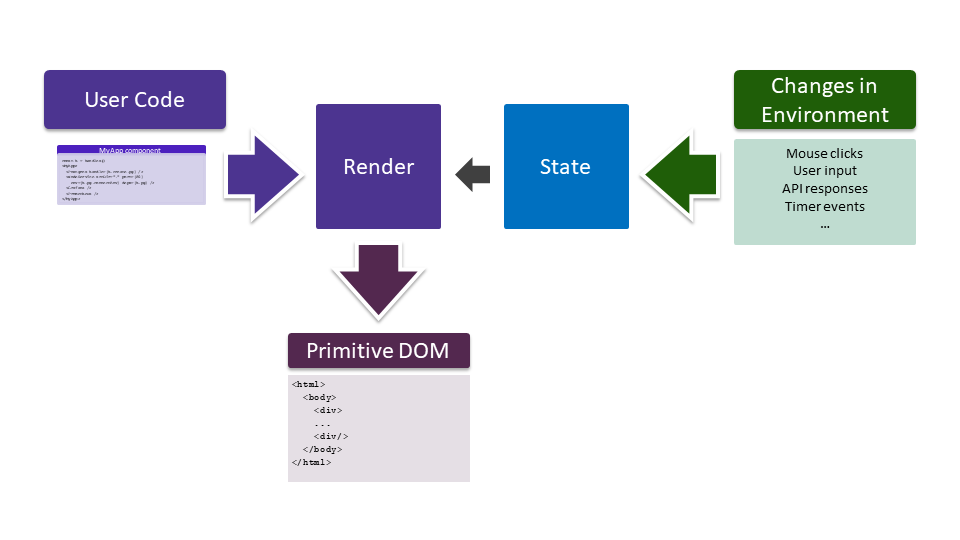 In React, the Components and other related code that you write, combined with the State, go through a process that React calls render that creates the final virtual DOM, made up of primitive Elements. React can then display that final virtual DOM in the browser.

Events from the browser and from other external sources can cause changes to the React state, which then causes React to run the render process again, potentially changing the final virtual DOM, with resulting changes being shown in the browser. This process of processing external events and re-rendering the DOM is core to how React operates.

Adapt also has an observe process, which runs as part of the overall Adapt build process, for monitoring and responding to external events and data sources. During the Adapt build process, Components can request to observe the external environment. After the Primitive DOM is built the first time, those observation requests are satisfied and have the opportunity to change the State. When the State changes, Adapt will run the build process again, potentially changing the final Primitive DOM.